Felony is a severe crime for which the punishment is imprisonment for more than a year or the accused can be punished with death, although the laws vary from country to country. A felony is considered to be a serious crime in the US and other common law countries.

The term invented from English where felonies were serious crimes that involved taking away (confiscation) a convicted person’s goods and lands; other crimes were termed as misdemeanors. Most of the common law countries have now excluded the felony distinction and replaced it with other distinctions.

There is a difference between felony and misdemeanor. Crimes involving less gravity are named as misdemeanors.

The distinction between felonies and misdemeanors is important. Felonies involve more atrocious crimes such as murder, rape, and theft and it has a more serious bad effect than misdemeanors.

For example, all felonies cases were originally punishable by death. And the law makes sure that the felon’s property is forfeited (to the Crown).

On the other hand, a misdemeanor was not punishable by death and hardly involved any forfeiture. An accused person of felony was not entitled to bail but an accused committed for trial for a misdemeanor usually was.

In the United States, felony/misdemeanor distinction is still applied widely, the Federal government characterizes a felony as a crime punishable by imprisonment in excess of one year or the death penalty. And if punishable by one year or less than one year, it is classified under a misdemeanor.

People don’t know that there are different categories of warrants that are issued by the court. Out of which one is a felony warrant.

Basically, if this type of warrant has been issued, the person named in the warrant could be arrested for felony charges.

Felony /bench/misdemeanor are types of arrest warrants that are used by the law generally. It is important to keep in mind that having arrest warrants is a serious matter and that one should not try even ignoring it. 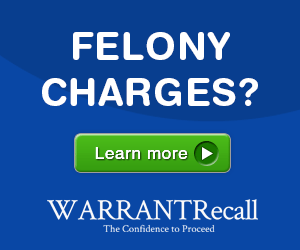 If you do not memorize committing any crime, and you find an arrest warrant having your name, then you must try getting the arrest warrant reviewed because you may be a victim of identity theft. Felony warrants last until the legal officer arrests the person charged with a particular felony warrant.

Largely, a felony can be categorized as either violent or non-violent offenses related to property. But this does not mean that they are limited up to the above-mentioned offenses

Felony warrants are open to being viewed by the public. They are considered public documents that can be legitimately and freely observed by the public and is an important type of warrant that must not be ignored.

Hence it’s important that you should try to search for felony warrants in your name in order to be sure that you are free from any felony charges that you may be unaware of.