A misdemeanor is one type of criminal offense that is usually punishable for up to 1 year in county jail, carrying on other penalties also. For example, misdemeanor offense may include petty theft, simple DUI, reckless (wild) driving, marijuana possession, shoplifting (burglary), prostitution, and harassment.

In California, Many criminal offenses are termed as “wobblers” who imply that they are classified as misdemeanors or felony offenses depending upon the circumstances of the crime.

The hearing of a crime must be commenced within the time limit established by the statute of limitations. The issuance of an arrest warrant in itself is enough to commence the action.

As a matter of fact, the warrant never really “expires.” However, because the accused has a right to a speedy trial protected by the Constitution, legal authorities (officers) must be a little careful to serve the arrest warrant upon the accused and thereby taking him into custody.

Misdemeanor Warrants do not expire they are ongoing until the person named in the warrant expires.

It NEVER expires that’s y it is advised that the accused must go to the court issuing warrant and deal with the issue. Or else, you can least expect it, someday or the other you could be stopped and placed under arrest.

When a warrant comes out, it usually has a notation, revealing the information on the distance the law enforcement is willing to travel to bring the person back. If it is just a simple traffic ticket case then they would not spend $400 to bring the person back to pay a $150 fine. More than one misdemeanor does not add up to a felony. The law has been changed for the last few years. 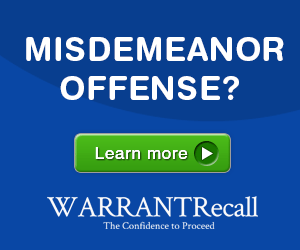 To answer some of the specific questions, any violation can lead to an exile (i.e. extradition). If the matter is financially not feasible, then the authorities can allow letting the accused person go and they will keep waiting until he comes back into their area and makes a mistake. The warrant of arrest remains valid forever once the case is on the computer with NCIC.

NCIC is an acronym for National Crime Information Center.  Basically a system reveling warrants, criminal history, and other required information.

This is also well known as the Federal check or FBI. If we want to run a statewide check for criminal charges and offenses, it goes through BCI (Bureau of Criminal Information). If we want to know everything about a person who has been involved in any offense in their past nationwide, we can run an NCIC check.

That is also a standard method applicable all over the country for the legal department before releasing anyone from imprisonment.

The lawful authorities in the country where the person is going, may not let him get into their country
because they don’t wish that criminals getting inside in their countries.

So it’s doubtful that he could be even refused entry to the other country. but coming back will be of no trouble. Since it is just a misdemeanor, which is really not a big deal.