If for example, you were stopped for a traffic violation and the police officer issued you a citation that contains a date when you will appear in court and you fail or refuse to appear, a bench warrant will issue against you, too.  The next time you are stopped for a traffic violation, the police officer will run your license plate and your driver’s license.

The bench warrant will appear on the DMV records as outstanding and the police officer will arrest you on sight.

If you have been charged with a crime and you post bail, the condition of posting bail is that you undertake on your own recognizance that you will appear in court whenever required to appear.

Once the court has sent you to notice that your presence is required and you fail or refuse to appear, then a bench warrant will issue against you.

If you have been found guilty of a crime by a jury and you are out on bail, you will be required by the court to appear in court for sentencing.

Failure or refusal to appear in court to give proof of completion of community service will cause the court to issue a bench warrant against you.

A bench warrant is the court’s coercive power to make you appear in court.  Your appearance in court gives the court jurisdiction over your person.

You are under the custody of the court once you appear before it.  The criminal indictments against you can then proceed: the prosecutor can present evidence against you.

If you are not under the jurisdiction of the court, you cannot fully exercise your right to cross-examine the witnesses against you because you will be deemed to have waived your right to appear.

Consequently, the DMV will also cancel your driver’s license upon the issuance of a bench warrant against you.

Your driver’s license will remain canceled until the bench warrant has been recalled.

The bench warrant will be recalled once you’ve been arrested by the police.  Or, if you have a good reason for failing or refusing to appear as ordered by the court, you can voluntarily surrender and argue for the lifting or recall of the bench warrant against you.

You have to file a motion in court for the court to consider recalling a bench warrant issued against you.

You need to plead a convincing reason to justify the recall of the bench warrant. 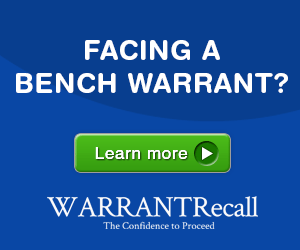 If you were sick or in the hospital, the motion you file should include evidence of your medical condition in order for the judge to recall the bench warrant.

If you wait for the police to arrest you, the bail you posted may not be reinstated. This means that while your case is on trial, you will not enjoy temporary liberty, you will be placed in detention for as long as your case is being tried.

It is in your best interest to have a bench warrant issued against you recalled. You need to voluntarily appear in court and plead a justifiable reason for your failure to appear.

You will need the services of a good defense lawyer who can convince the judge that you have a justifiable reason for your failure to appear.

You need a skillful and experienced lawyer to present evidence on your behalf of this justifiable reason.